Emil Ninu moved from AEK Larnaca (Cyprus) to Hapoel Bnei Lod – second Israeli tier team. The contract between the Romanian player and Israeli team has been signed this morning. Ninu started his professional carrer at FC National in 2005. He moved to Steaua Bucharest in 2007 from where he was loaned to Gloria Buzau and Farul Constanta. He also played for Viitorul Constanta and Universitatea Cluj. His first contract outside Romania was signed last year when he joined Bulgarian team, Levski Sofia before moving to AEK Larnaca. Between 2006 and 2007, Ninu played 12 matched for Romania U-21. 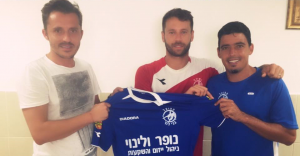 Emil Ninu is the second Romanian footballer to play for Hapoel Bnei Lod after Adrian Hurdubei.