Romanian champions, FC Astra Giurgiu will make their Champions League debut on July, 27th against the Danish champions FC København in the 3rd preliminary round. 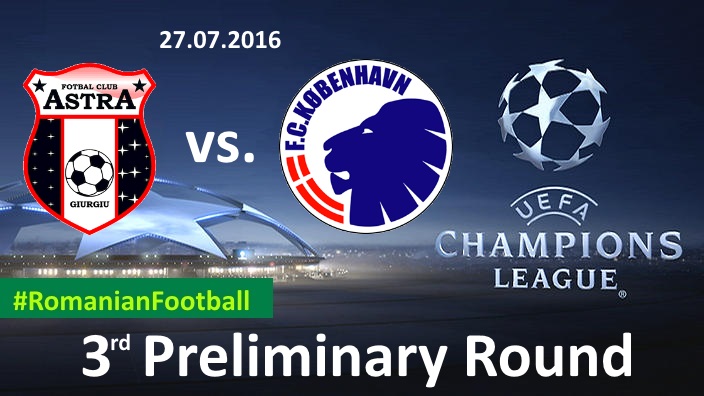 The match is set to start at 20:30 (local time) on July 27th in Giurgiu, on Marin Anastasovici Stadium. Astra has only 3 seasons in the European Cups – all 3 of those in Europa League. This is Astra’s 4th international season. So far, the Romanian champions played 24 matches of which 11 wins, 6 draws and 7th loss. Their most important European perfomance was obtained in the 2014/2015 season when their reached the Europa League group stage after an away win against the French side, Olympique Lyon with 2-1 in the Play-Off.

The Danish team has a lot more experience in Europe. They have 66 played matches so far in Champions League (including the qualifying rounds): 28 wins, 12 draws and 26 losses. They reached 6 times in the group stage and their best performance was round of 16 in the 2010/2011 season. In the current seasons, the Copenhagen team started in the second preliminary round where they had an easy task. They defeated the champions of Northern Ireland, Crusaders with 9-0 on agg. (3-0 away win and 6-0 home win).

Astra and København met in a friendly match just few weeks before. The only goal of that match was scored by Astra’s midfielder, Felipe Teixeira (44′). In the 75th minute, Florin Lovin was awarded with a red card.